Me, my garden and my blog

I think that making a garden here has been, and still is, one of the most enjoyable and satisfying things I have ever done. It’s a great mixture of learning by experience, or mistakes, creativity and discovery as you find the plants you like, and your tastes change as you learn more about the garden and its world.

Nearly sixteen years ago, we moved here to the Hautes Pyrenees. And slowly but surely over the years, my old life began to fade away as life here took hold. And now? I trained over five years to gain a diploma in Garden Design for pleasure, and I plunged into the life of the garden, and sank completely, in a good way!

My garden is in a village, about an hour from the mountains, which we get a beautiful view of from our upstairs bedroom window. Well, we would, if the church spire wasn’t slap bang in the middle of the Pic du Midi. But no matter.

The ground is essentially the old riverbed of what is now the Adour River. and so it is chockful of giant washed river stones, and very free draining. Where it faces South, it bakes like a biscuit, but in the shade, and especially by the banks of the canal or ruisseau that flows at the bottom,  it can offer more gentle conditions to shade-lovers. But, although the growing season is long, it is a tricky climate to master, and will always trip you up. Damp, sometimes very cold, winters and springs can give way to very dry, hot summers with occasional sharp and very wet storms that batter everything.  So, plants can be a bit challenged as can humans.

It’s a delight and a constant source of renewal and enjoyment.  I love it, and the point of the blog? Is to share some of the ups and downs, and hopefully, for readers to enjoy it and laugh with me. I do quite a lot of laughing, some of it hysterical! And the air is sometimes blue, but only in English.

Sizeable amounts of fine and persistent rain have fallen finally.  And now the River Adour looks like a river, not just a large puddle.  Not normally a gratifying experience, rain, but I have been quite enthralled by it, as has the garden.  Although it is becoming very chilly at nights, plants are still growing, and many have made a remarkable come-back from the arid conditions of the summer and autumn.  I have been wandering about, as well as doing more practical jobs, mainly noticing how much has in fact recovered.  One or two plants have gone beyond recovery and have actually mistaken all of this for Spring.  Both the Rosa banksiae, the yellow and the cream coloured one, have sporadically flowered.

The cooling temperatures, and a couple of frosts, more predicted for tonight, have brought out the colours in some plants- something which I had thought we might miss out on owing to the dryness.  Euonymus alatus ‘Compactus’ is rightly one of those Autumn starlets, and the cold and wet, have given the leaves an almost glossy finish.

The unknown orange Abutilon which I love very much for the endless supply of soft orange chinese lantern-type flowers, is still going, but the Berberis, with the very long name, has abandoned itself to scarlet, scarlet drop-shaped berries and the leaves. 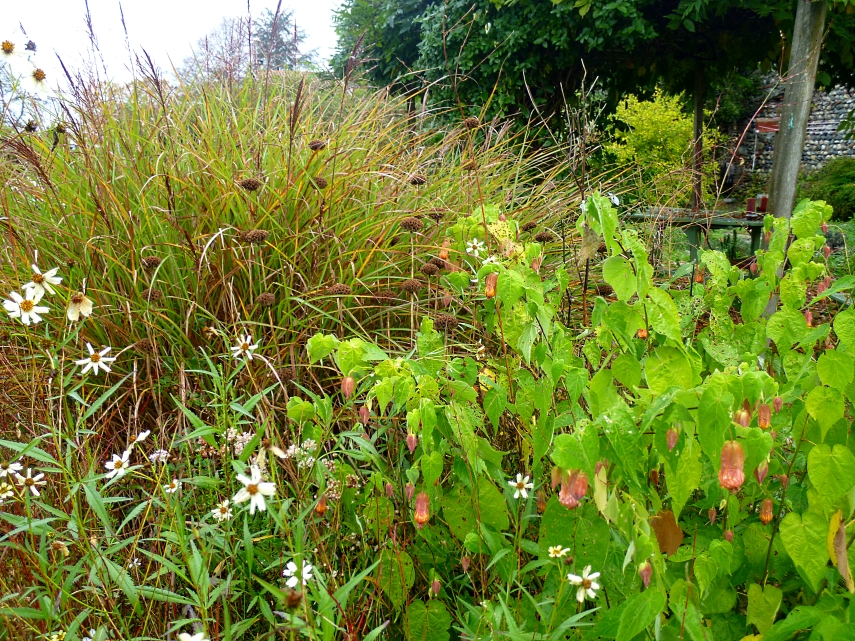 Having looked very sorry for itself most of the last few months, my small and experimental Stumpery is enjoying the cool and the wet.  The Persicaria is turning buttery, but the two ferns at the front, Dryopteris atrata, are growing back, and the blue-green fronds of the new Mahonia, well, new this year to me, Mahonia eurybracteata ‘Soft Caress’ have handled the year well and are looking fresh.  This is a slow spot for growth, shady but often dry, and tough, tough stony, poor soil, but like everywhere else, I am just trying to see what will work, and grow, even in less than ideal conditions.

Today, one of the Salvia confertiflora flowers finally began to open, with small, cream-lipped orange-red flowers pushing through the red velvet bracts.  Now there’s something you don’t often see- even if it is inside in our cold, but not freezing hall.

I have a very tricky patch in the New Garden, so called because we dug it out about seven years ago from what had been the tumble-down site of a barn. There were no remnants of the barn there, but there were snakes, other living things and a lot of river rocks as well as some generally ghastly thin soil. One diagonal half sits in the shade of the open barn all year round, the sun can only make it past the walls for a very short time in high summer, and the other half roasts as it looks both South and West with no cover at all.  So, sticking with my theme of working with what I’ve got and not fighting it, it has taken a good while to make an impression on the shady half. For a very long time, the only show in town was my Rosa ‘Reine Marguerite d’Italie’ which I have discussed at length in my post on tough roses.  She does deserve a photo though.

But last year, I decided to try and see if I could establish some ferns, as well as a cruelly transplanted, but now doing fine, Mahonia which was already quite big.  So, last year, they all made it, through a very wet spring, a very hot and dry summer and a middling cold winter.  I bought them small, on the grounds that this always gives them a better fighting chance, especially in a pretty rubbish spot.  And I tried to select varieties that can cope with wet and dry. This spring I also added some low-lying groundcover planting, which so far is doing ok. I am aiming for a green-ness that is both resting and as lush as such a tricky corner can be. Here are the ferns coming back to life in the last couple of weeks- admittedly, it’s not so great in the winter, but as they mature, I live in hope.

‘The King’ is a magical fern. This year, I think it might get close to a metre high and wide, and the splayed fronds have extra finger shapes on them, which make them look like something out of Tolkein. You can see this in the tallest frond in the photograph above.

Dryopteris atrata is a busy bee of a fern. Not so tall, about 0.5m high and wide, it nevertheless has an energetic presence with its upright posture, and slender but strong fronds. It wants to be noticed, and the darkness of the new growth is lovely as a contrast with the yellow-green of the foliage. I really like it.

This Polystichum is almost cuddly with its soft, fluffy new foliage. This now looks more like a normal fern, but two weeks ago, I would have almost called it ‘adorable’. It drapes beautifully from the centre and almost poses for the camera. It will make about 0.75m high and wide this year, I think.

Now, ok, this isn’t a fern, but this is one of my new groundhuggers, the strangely named Euonymus fortunei ‘Wolong Ghost’. Right now, it is a bit junior, but it’s looking good as you can see, threads of sliver veined slender leaves and it will weave its way around. I am sure I will be impressed.

And here is Osmunda regalis, which I wanted to include as it is a splendid fern, stately and refined. However, it is a bit of a cheat as it is actually growing in the shady ground by our canal or ruisseau.  It would certainly struggle round in the New Garden as it likes more lush conditions, but I love it anyway.

discovering wild plants in the Languedoc

Passionate about Gardens and Flower Photography

Still learning after all these years.....

The sensory pleasures and earthy delights of gardening.

Hurtled to 60 - The Retirement Years

A Life in Wellies

the inside view on life and holidays in Languedoc, southern France

Creating my own garden of the Hesperides

Forging and Testing the Heart's Mettle in the Ozark Highlands

Ideas from a Suffolk garden

Off The Edge Gardening