Me, my garden and my blog

I think that making a garden here has been, and still is, one of the most enjoyable and satisfying things I have ever done. It’s a great mixture of learning by experience, or mistakes, creativity and discovery as you find the plants you like, and your tastes change as you learn more about the garden and its world.

Nearly sixteen years ago, we moved here to the Hautes Pyrenees. And slowly but surely over the years, my old life began to fade away as life here took hold. And now? I trained over five years to gain a diploma in Garden Design for pleasure, and I plunged into the life of the garden, and sank completely, in a good way!

My garden is in a village, about an hour from the mountains, which we get a beautiful view of from our upstairs bedroom window. Well, we would, if the church spire wasn’t slap bang in the middle of the Pic du Midi. But no matter.

The ground is essentially the old riverbed of what is now the Adour River. and so it is chockful of giant washed river stones, and very free draining. Where it faces South, it bakes like a biscuit, but in the shade, and especially by the banks of the canal or ruisseau that flows at the bottom,  it can offer more gentle conditions to shade-lovers. But, although the growing season is long, it is a tricky climate to master, and will always trip you up. Damp, sometimes very cold, winters and springs can give way to very dry, hot summers with occasional sharp and very wet storms that batter everything.  So, plants can be a bit challenged as can humans.

It’s a delight and a constant source of renewal and enjoyment.  I love it, and the point of the blog? Is to share some of the ups and downs, and hopefully, for readers to enjoy it and laugh with me. I do quite a lot of laughing, some of it hysterical! And the air is sometimes blue, but only in English.

Sometimes an idea enters my head and sticks…the last month or so, whilst taking photographs in the garden, I was seized by the notion that so many flowering plants would make fabulous earrings- only the flowering part I hasten to add.  And I was reminded that a book I really enjoyed, with its fusion of autobiography and gardening, sometimes painful, was ‘The Jewel Garden: A Story of Despair and Redemption’ by Monty and Sarah Don. And their life and careers together started with jewellery. There is a wonderful photo in the book of them both sporting some of their work, with Monty looking as if he was auditioning for Adam Ant. It’s very touching when you read the whole story.

So, my first contender for earring potential would be Leycesteria formosa, the summer-long flowering shrub whose flowers seem to last for months, only becoming more luscious and dark as the weeks go by.

It is such a good, undemanding plant and graceful too, with its gently arching branches, so it does need a bit of room, and would be wasted jammed into a small space.

The second contender would be Feijoa sellowiana, the Pineapple Guava.  My plants have taken their time to flower reliably, probably more than 5 years. But now, for just a short while at the end of May, these gorgeous flowers appear. Pink slightly fleshy petals surround an electric burst of bright pink stamens with golden tips.  They certainly would have qualifed as dressy earrings in my Mum’s jewellery box.

And then there’s my pale orange abutilon, unknown variety, which I bought as a weenie from ebay years ago. It used to be in a pot, and this is its first year in the ground and it has been a hard year for newbies in the ground. So, it is a little subdued but will make it, I think. I love the classy droplets in pale orange, though I also lust after a variety called ‘Orange Hot Lava’. I am sure you will know why.

And then there are Fuchsias. I am not a big grower of Fuchsia, mainly because I don’t have a lot of kind shade and dampness, but in the garden I grow Fuchsia magellanica, which is really tough and comes back no matter what. The flowers are elegant, slim and pencil-like, and even better before they open fully, I think.

And I also have a little Fuchsia ‘Edith’ in a pot, which I bought as a plug at Chelsea last year. It has just produced the first flower, which is not quite open, but the cerise pink is quite gorgeous with the lavender underskirt. 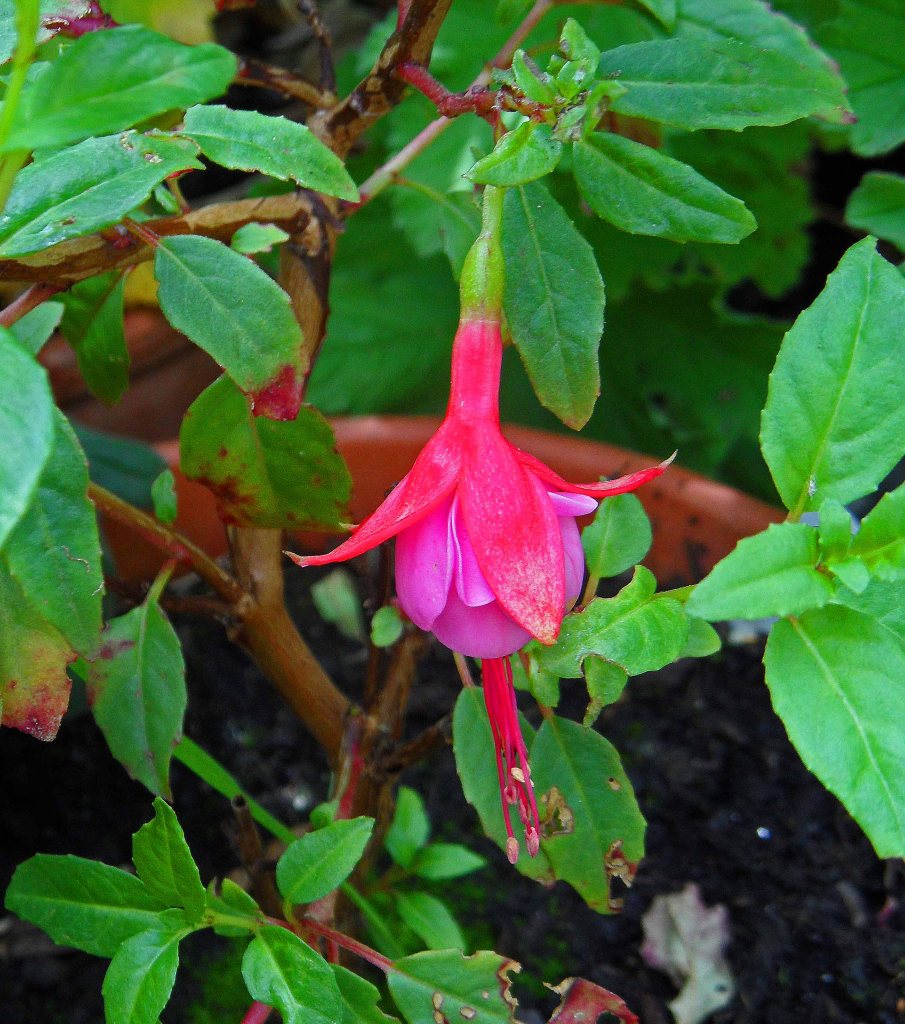 And, finally, despite my Carmen Miranda tendencies, the plant I would pick myself to wear as an earring would be..Eucomis autumnalis, and I would simply take the little green pineapple-bit off the top. Quite lovely.

One thought on “Plants with earring potential…”

discovering wild plants in the Languedoc

Passionate about Gardens and Flower Photography

Still learning after all these years.....

The sensory pleasures and earthy delights of gardening.

Hurtled to 60 - The Retirement Years

A Life in Wellies

the inside view on life and holidays in Languedoc, southern France

Creating my own garden of the Hesperides

Forging and Testing the Heart's Mettle in the Ozark Highlands

Ideas from a Suffolk garden